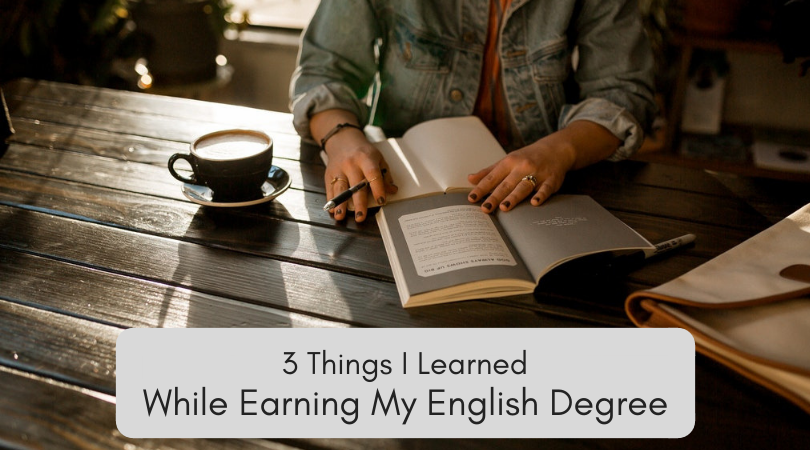 As an undergrad student majoring in English, the one question I got all the time was, “So you’re going to teach?” My answer always has and always will be “no.” Teachers are amazing, but teaching isn’t my calling. If I taught, the students and I would both be crying a lot, and I find it best to avoid mass crying.

Though I don’t use my degree to teach, it’s come in handy a time or two over the years. Today I want to share the three most important lessons I learned while getting my degree and how I’ve put them to use.

I LEARNED HOW TO REALLY READ.

I’ve always been an avid reader, but it wasn’t until college that I learned how to read through various lenses. Whenever I read anything before, I read it through the lens of a white, middle-class millennial. But in college, I learned how to read through the lens of the Victorians, the Romantics, and the audiences who witnessed Shakespeare’s plays. As I earned my degree, I learned that when I read, I need to think about context, such as:

What time period was this written in?
Who was the original audience?
What would stand out to them that can inform my opinion today?

That knowledge has been incredibly beneficial and opened up texts to me in whole new ways.

I LEARNED THERE’S A REASON WHY SO MUCH CLASSIC LITERATURE IS REVERED, EVEN IF I DON’T LOVE IT.

Reading Moby-Dick wasn’t the most fun I’ve ever had, but I’m glad I read it. Melville’s story of an obsessed man going on an epic quest is a timeless story about longing and revenge. I’m not Shakespeare’s biggest fan, but it’s astounding to me that people are still analyzing and enjoying his words even now. His use of language amazes me. I might not pick up Paradise Lost or The Scarlet Letter for light weekend reading, but those stories tell us something profound about humanity, sin, and judgment. I didn’t love all the reading I was assigned in school, but I did discover books like The Monk by Matthew Lewis and Pudd’nhead Wilson by Mark Twain. I also encountered contemporary works like Never Let Me Go by Kazuo Ishiguro and Love Medicine by Louise Erdrich. Good fiction always tells the truth, and those books tell it beautifully. Even though I didn’t like every text I was assigned in school, I’m better for having read them, and I was exposed to some great writers along the way.

I LEARNED WHAT IT MEANS TO BE A FEMINIST AND THAT I AM ONE.

In my last semester of college, I took two classes that paired perfectly. One was an English class teaching the theory and fiction of the women’s movement thus far, and the other was a sociology class about gender. I went into those classes pretty neutral about feminism. It wasn’t a word I used to identify myself, but if someone else used it, that was just fine with me. I couldn’t have given you a good definition of the term at all until I read the passionate words of Audre Lorde, Naomi Wolf, and others like them. I didn’t fully understand how hard women had to fight to vote or to buy a house on their own. I couldn’t have explained why feminism is so important before I watched a documentary in my sociology class about how women are objectified. I knew that was true, of course, but it wasn’t until I saw scenes of women allowing members of a rock band to throw pieces of deli meat onto their skin to see if it would stick that I realized just how little women’s lives matter to people who only see them as entertainment.  Learning about how the world has mistreated women and how so many have fought back shaped me in ways that I’m still uncovering.

What are the important things you learned in school? I’d love to hear them!